On September 2, 1948 Rayne's Sand & Gravel, Inc. was purchased from Alton Charles Langton, a local businessman, by William D. Rayne and Mary E. Rayne. When the original purchase took place, it included four small dump trucks, one power shovel, one trailer, a few truck tires, parts, two shovels and a lot of hand tools. After this purchase from Mr. Langton, the name was changed from "Sonny Langton" to "William D. Rayne Sand & Gravel." The business was originally operated by Mr. Rayne and his son, William T. Rayne. Mr. Rayne operated the business out of his home on North Main Street in Berlin, MD. 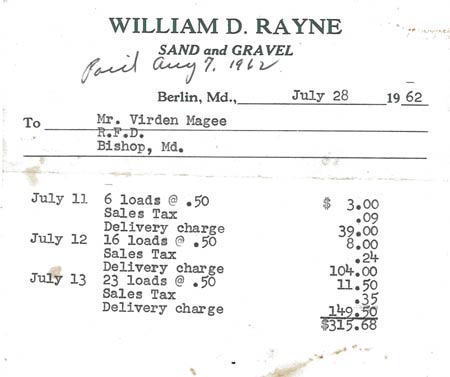 In 1962 Mr. Rayne's younger son, Denman E. Rayne Sr., aka "Denny", began to work with his father. Mr. Rayne's older son, Tim, went on to operate the other family business known at that time as "Conley & Rayne's". That business is currently operating as "Rayne's Reef" under different ownership.

In the early years "William D. Rayne Sand & Gravel" catered to the local poultry industry but as the local resort of Ocean City, MD began to grow, the work started to focus on all of the new construction taking place. Along with this change, the business began to grow. In 1966, not long after Denny Sr. began to work with his father, Mr. Rayne passed away. Denny Sr. took over the daily business operations for Mrs. Rayne until May 10, 1974. On this day Denny Sr. and his wife, Jo Ann, purchased the business from Mrs. Rayne. That same year on July 30, the business was incorporated under the name of "Rayne's Sand & Gravel, Inc."

Up until 1979, the operations continued at the North Main Street location but the office was moved to Denny Sr.'s home, which is also on North Main Street, just a few doors down. However, in 1979 Denny Sr. purchased a piece of commercial property on Old Ocean City Boulevard in Berlin and moved the operation to the new office and shop facility. The property was 1.585 acres and provided enough room to inventory stone for resale. As Ocean City and the surrounding area continued to grow, so did the business. Rayne's became involved in the construction of homes in Ocean City as well as Ocean Pines. As these areas expanded, materials and grading services were in greater demand.

Denny Sr. and Jo Ann raised two sons in Berlin and both of them are now involved in the business. Denny Jr. joined the business in 1993 and Sean in 1996. As Denny's sons began to master the business, operations continued to grow and larger construction projects were taken on. Soon after Denny Jr. and Sean joined the business, they started to outgrow the facility on Old Ocean City Boulevard and Rayne's began to look for another piece of property.

In 2002, Rayne's purchased the property on Logtown Road in Berlin where the business is currently operating. This new property was 8 acres and would provide enough room for the business to stock more materials and build a new office and shop. It was a great location with good visibility from Route 50, one of the main highways in Berlin. At this location Rayne's has been able to more than double the inventory of stone and provide customers a much larger variety. After a couple of years at the new location, an additional 1.220 acres was purchased to expand the stone yard even more.

As Denny Jr. and Sean have become more involved in the business, the residential and commercial site general contracting side of the business has grown tremendously. Please visit "Our Work" and "Gallery" to view some of the projects that have been completed over the past few years.

Today, Rayne's Sand & Gravel, Inc. now owns 36 pieces of construction equipment and has grown into one of the largest excavation contractors on the Lower Eastern Shore of Maryland. Rayne's serves customers in Worcester, Wicomico and Somerset Counties as well as Sussex County in Delaware and Accomack County in Virginia.